Yes, and the “Reading List” too (down below), but as Part of a Kind of Weekly Update

Someone I loved once gave me a box full of darkness. It took me years to understand that this too, was a gift. – Mary Oliver

There was a new voice which you slowly recognized as your own, that kept you company as you strode deeper and deeper into the world. – Mary Oliver 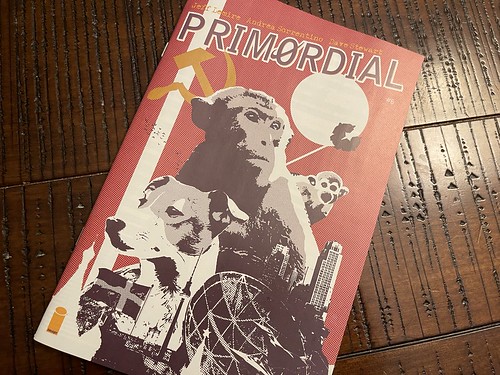 One Thing Leads to Another and Then to VR

A few months ago, I discovered the Communion After Dark podcast - it is a well produced weekly podcast featuring darkwave, techno, goth music hosted by DJs Paradise, Maus and Gold. I’ve discovered so much good music - a lot of which doesn’t show up in Apple Music but it’s easy enough to import the MP3s there from Bandcamp and other places. I highly recommend it.

Incidentally, CAD has been featuring Massive Ego’s music lately and I was super happy to see their new EP arrive in the mail this week. :)

That led to following CAD on YouTube - the podcast is posted there too and running it on the TV while I’m working makes it feel like I’m having friends over (and finding techniques to keep the sometimes lonely feeling of remote work is important.)

And that led to (I think an algorithm surfaced it at some point), discovering DJ Maus’ on Twitch. Never used Twitch much before, but in the last month I’ve managed to follow and subscribe to several darkwave and furry Twitch streams including CAD, DJ Maus, Vox Sinistra, Sasha Fluffy UWU and of course Om Nom the Nom.

And all that lead me into VR - there are many, many furry hangouts and darkwave clubs in VR. I got my Oculus Quest this past week and I’m racking up time in it (to the detriment of my final MSEE project) exploring VRChat which is popular among furries AND the online goth/darkwave scene.

I wouldn’t be a recovering Privacy Panda if I didn’t admit I’m a little leery of being in Zuckerberg’s playground, but the allure of furry and goth VR has overpowered that, at least for now.

And I’ve already installed Unity to start building my own fursona avatar - because of course I did. The Windows computer is turning out to be useful for more than just MSEE work.

Next week I’ll have an update on VR for sure, and I’ll have spent more time researching and working with minimum variance acoustic beam-forming (the MSEE project I am working on when I don’t have the VR headset on) - I’ll give an update on that too. One of the foundational papers (by Capon) is older than I am, and that’s pretty old. I plan on writing the project in Python and NumPy to make it more interesting (instead of MATLAB, which I think could limit the application and impact beyond academia). :P

Besides what I’ve dug into above, here are some of the things that have been shared with me or caught my attention in the last week or so.

See you next week with more!